KINGSTON, Jamaica — The Jamaica Coalition for Tobacco Control (JCTC) says the importation and sale of e-cigarettes in Jamaica should be banned.

Electronic or e-cigarettes are a type of electronic nicotine delivery system (ENDS), which do not burn or use tobacco leaves, but vapourise a solution that is then inhaled.

But according to JCTC e-cigarettes are not safe and may cause irreversible lung damage and lung disease.

“The total impact on health of e-cigarettes is unknown, but e-cigarette use is associated with lung disease and death. Studies show dangerously high levels of the carcinogen pulegone in menthol-flavoured e-cigarettes,” JCTC said in a statement today. 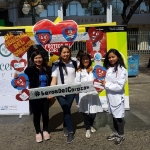